The first in a series of four reports documenting some of the highlights from a busy tour season in 2019. This installment documents the return of Adjutant Charles Sprout’s sword to Cedar Mountain Battlefield.

Reflecting on the past year’s activities, the board members of Friends of Cedar Mountain Battlefield take great pride in their successful efforts to increase the number of public and private guided tours of the battlefield offered in 2019. In addition to the regularly scheduled and advertised monthly tours, generally given on the 3rd Saturday of each month, May through October, there were a few tours given by happenstance. The most important of these for the author was when he guided Mr. George Griffin, a descendant of a 10th Virginian soldier, and fulfilled this out of state visitor’s long-time desire to walk in his ancestor’s footsteps.

The last time George and his wife Jo Ann visited many years ago, the land was not preserved, nor were there any markers to delineate where the fighting happened. It was a marvel for George to have access to the land and walk in his ancestor’s footsteps. It was especially meaningful for me to provide that service. And then there were the pre-arranged tours presented by special request. All of these were significant but four tours stand out as being especially enjoyable for the visitors as well as the guides.

We will feature a summary of these special guided tours, each as an individual post, in the coming weeks. Here is the first installment.

On May 13, Mr. Joseph Maghe and his wife Deb brought several artifacts from their private collection to the Cedar Mountain Battlefield Visitor’s Center. Most prominent among them was the sword of Adjutant Charles P. Sprout, 28th New York Volunteers, who was killed in action at the Battle of Cedar Mountain on August 9, 1862. I’ve had a long association with Joseph through our common interest in the 13th Massachusetts Volunteer Infantry. He is one of the most magnanimous collectors it is my pleasure to know, who has no qualms about sharing his collection with interested parties. In his words, “The historical articles are meant to be seen and shared.”

Many years ago, it was Joseph who tipped me off that eBay was auctioning one of my great-great grandfather’s Civil War letters. Joseph’s consideration, allowed me to purchase this singularly treasured artifact, a September 1861 letter written from Harper’s Ferry. When I learned Joseph was traveling to Manassas to share some of his collection with a private tour, I invited him to Cedar Mountain. He accepted. We had not yet met face to face, but that introduction was made at the Manassas tour. A couple of days later we met again at Cedar Mountain.

FCMB Vice President Michael Block and battlefield historian Lon Lacey were also in attendance. The most exciting relic was the sword of Adjutant Charles Sprout, the popular officer of the 28th NY Infantry whose death in the battle was widely lamented. He was killed during the famous charge of General Samuel W. Crawford’s first brigade, against the weak left flank of Stonewall Jackson’s line. In this action the regiment went in with 320 men, and lost 209.

General Crawford himself mentioned Sprout in his report of the battle:

“Lieutenant Sprout, adjutant of the Twenty-eighth New York, was killed at the side of the enemy’s battery, and the gallant conduct of the men was sufficiently attested by one of the generals of the enemy himself, as we stood together upon the battlefield twenty-four hours after the action amid the mingled bodies of the dead of both sides.” A touching denouement to this story is that Adjutant Sprout’s daughter attended the 28th New York monument dedication ceremony at the Culpeper National Cemetery in 1902.

Harry E. Bowen, the son of Captain Erwin Bowen, described the scene in a letter to his family:

“Mrs. Stilson [of Detroit] was introduced to the audience as the daughter of Adjutant Sprout being three months old at the time of his death at Cedar Mountain. Her father had wished her named Annie Lourie Sprout, which lent an added charm to the song of Annie Lourie which she sang. The enthusiasm brought her back the second time, and all joined in the Star Spangled Banner.”

After enthusiastically swapping stories and sharing personal artifacts from the war, we walked the battlefield together. A drizzly day gave the tour added interest.

Pictures are worth a thousand words, so here are  several from that special day. 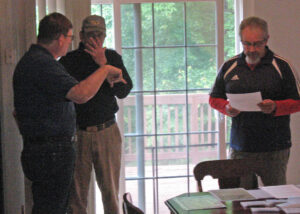 Board members Michael Block and Lon Lacey talk while Joseph reads the transcript of my great-great grandfather’s September 1861 letter written from Harper’s Ferry, on the Maryland side of the river. 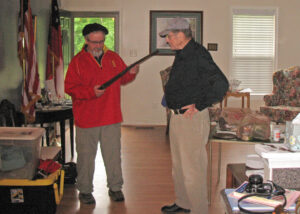 Board member Lon Lacey shows Joseph his ancestor’s carbine with name inscribed on the stock.

At “The Point.” This is the spot on the battlefield where the 28th New York charged through the wheat field to attack the weak Confederate left flank.

Near the spot on the battlefield where Adjutant Charles Sprout, 28th NY, was killed. 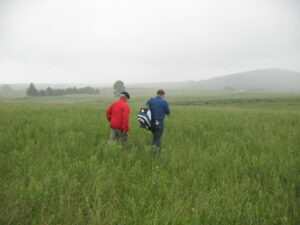 Walking the field, Cedar Mountain in the background. 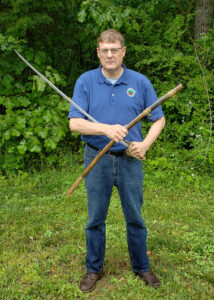 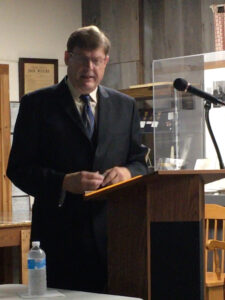 A photo of Mike speaking at the New Holland Land Office Museum, in Batavia, N.Y., May, 2019.  He spoke on the 28th New York’s action during the Battle of Cedar Mountain, and the postwar reconciliation between the 28th NY and the 5th Virginia Infantry.  This included the “returning of the 28th’s battle flag by the Virginians in 1882, and the New Yorker’s visit to Staunton, VA the following year.

So that’s it for this week.  Next up will be a recap of a July tour that focused on the 27th Indiana Infantry with the descendant of Edmund Brown, the author of the 27th’s regimental history.