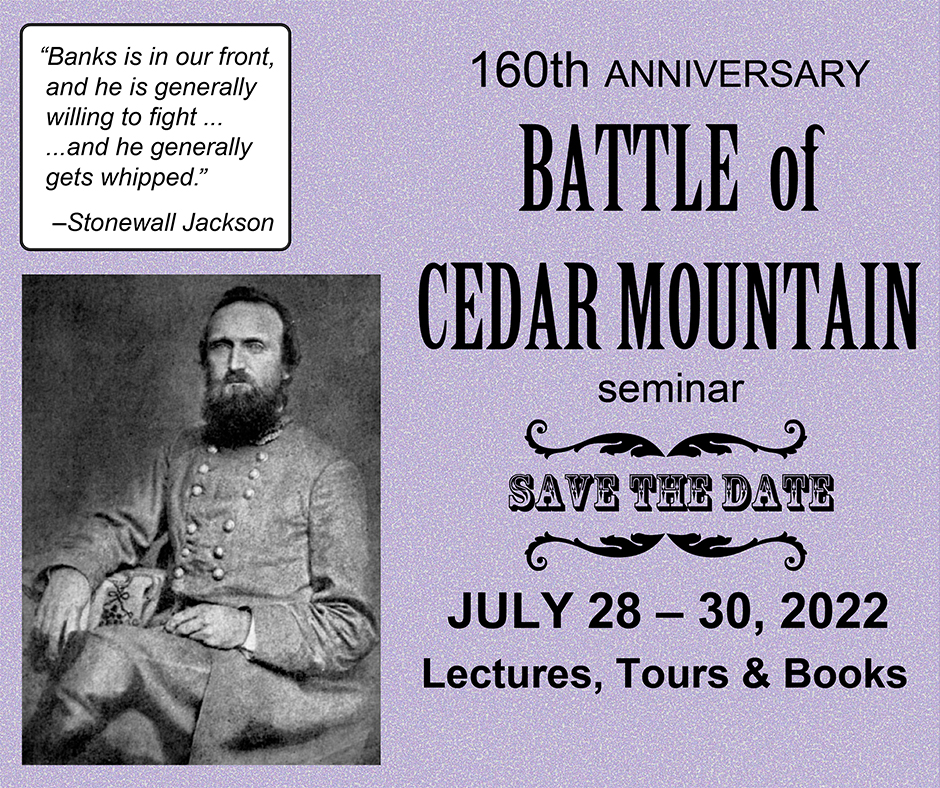 Thank you for your interest in our seminar commemorating the 160th anniversary of the Battle of Cedar Mountain.

The event will be held in the banquet rooms of Pepper’s Grill, attached to the Culpeper Best Western Hotel. You may reserve a room at this link: Reserve Room

REGISTRATION HAS CLOSED; thanks for your interest.

The banquet rooms will be open approximately between 3 p.m. and 9 p.m. for an informal drop-in welcome and orientation.  Representatives of Friends of Cedar Mountain will greet guests and provide information packets on area attractions, tour locations, speakers, and more. Dinner is on your own. There is a buffet available at the hotel or numerous restaurants to choose from in Culpeper.

“The State of the Medical Field in 1862 and how it Impacted the Soldiers at Cedar Mountain.”

Tour – The Confederate Approach to the Battle

Those who signed up for this special bus tour with author Michael Block will depart from the hotel parking lot at noon and stop for lunch at War Craft Brewery. Fee-based, registration required.

One-hour guided walking tour of historic downtown Culpeper with John Christiansen, executive director of the Museum of Culpeper History. This tour will include stops highlighting the A.P. Hill boyhood home, the Pelham House, the home of William “Extra Billy” Smith, the Battle of Culpeper Courthouse, the Orange & Alexandria Railroad, and Culpeper National Cemetery (1/2-3/4 mile loop). Seminar attendees will meet at the Culpeper Visitor Center & Museum. at 113 South Commerce St. in Culpeper. There is some parking in front of the Visitor Center and other lots are nearby.

6:00 pm – Keynote Dinner. Location: Luigi’s Restaurant, 235 Southgate Shopping Center, less than 10 minutes from the seminar lodging at the Best Western hotel. Luigi’s is known for its excellent food and service.  Appetizer and cash bar at 6:00 pm. The menu for dinner includes a choice of 4 appetizers;  salad; bread; and choice of 4 entrees:  lasagna, ziti, a vegetarian pasta parmesan, and mixed vegetables with shrimp.  A variety of desserts come with the meal.  The price for the dinner is $40.00.

7:30 pm – Historian Jeffry D. Wert, author of 11 books and a Pulitzer Prize nominee, will give the keynote presentation, “Jackson Is With You! Stonewall at Cedar Mountain.”  The keynote dinner is open to the general public as well as seminar attendees. and may be registered for separately at the link above.

Title:  “The Tenth Maine have done nobly under fire but all to no purpose.”

Bradley M. Forbush will lead the battlefield tour on Saturday.

Ron Coddington, is editor of Military Images, a quarterly magazine dedicated to showcasing, interpreting and preserving Civil War portrait photography. He has previously written a series of five books about Civil War photography, published by The Johns Hopkins University Press, and articles for The New York Times, USA Today, Civil War Times, Civil War Monitor, the Civil War News, and other publications. His next book, Gettysburg Faces, will be released this summer. Ron’s presentation is titled, “Civil War Portrait Photograhy: A Primer.”

Nicholas Picerno, historian and lecturer, will speak about the 10th Maine Regiment at the Battle of Cedar Mountain.  The title of his talk is “The Tenth Maine have done nobly under fire but all to no purpose.” The 10th Maine Regiment reported 173 men lost, killed, wounded, captured or missing during the battle. Nick is Chairman-Emeritus of the Shenandoah Valley Battlefields Foundation in New Market, Virginia. In 2006, Picerno spearheaded the effort to purchase, protect and interpret the Third Battle of Winchester battlefield, now the largest preserved Civil War battlefield in the Shenandoah Valley. He also serves on the Federal Advisory Commission of the Cedar Creek-Belle Grove National Park, is Vice-President of the Lincoln Society of Virginia, and he serves on the Advisory Board of Kennesaw State University’s Center for the Study of the Civil War Era. He is a former member of both the board of trustees of the Museum of the Confederacy in Richmond, Virginia, and the Board of Directors of the Lee-Jackson Education Foundation of Charlottesville. For the past 40 years Picerno has been researching the history of the 1st-10th & 29th Maine Infantry regiments during the Civil War. He has published articles in both “Civil War Times” and “America’s Civil War” magazines.

Paige Gibbons Backus, is a public historian and currently site manager at Historic Brentsville Courthouse Historic Centre, (a 19th century courthouse and jail complex with a lot of Civil War history) and Lucasville School (a one-room African American schoolhouse). Paige will discuss the state of the medical field in 1862 and how it impacted the soldiers at Cedar Mountain. Paige is a native of Wisconsin, and graduated from the University of Mary Washington with a bachelor’s degree in Historic Preservation and George Mason University with a master’s degree in Applied History. She has been in the public history field for close to ten years focusing on educational programming and operations working at several historic sites throughout Northern Virginia including Gadsby’s Tavern Museum, Sully Historic Site, and Ben Lomand Historic Site.

Paige  focuses on the social side of history. Her areas of interest range from topics of women’s history to the more morbid side of history such as death, disease, and medicine. Her presentations range from these broad topics to more specific presentations including “The Hospitals of First Manassas,” “The impacts of the Letterman Plan,” and “The Civilian Experience at the Siege of Vicksburg.”

Frank is historian and park ranger at Fredericksburg & Spotsylvania National Miltary Park. He is author of “Stonewall Jackson at Fredericksburg: The Battle of Prospect Hill.” and “The Fredericksburg Campaign; Winter War on the Rappahannock.” He has written numerous articles on the Civil War and conducts extensive battlefield studies and tours throughout Virginia.

Glenn Stach, Preservation Landscape Architect will present an engaging talk titled, “The Rapidan Front – The Militarization of Culpeper County 1863-1864.” This is the largest land-mass military occupation of the American Civil War. Beginning with the Confederate withdrawal across the Rapidan River to the promontory view of Clarks Mountain, responding Federal forces employed an all encompassing militarization of Culpeper County from November 1863 to the start of the Overland Campaign in the Spring of 1864. The talk will detail the landscape significance and strategic employment of key terrain, observation points, cover and concealment, and avenues of approach and withdrawal, each influenced by the Confederate’s near impenetrable line along the Rapidan River. This landscape resource-focussed talk drapes the natural landscape over the years of scholarship devoted to this subject matter by historians within and beyond Culpeper, to bring to life the cultural landscape of one of the most documented winter encampments of the war.

Glenn Stach, RLA is a preservation landscape architect residing in Asheville, NC. An alumnus of Virginia Tech, where he first learned to read the natural landscape, employ design, and understand the broader cultural forces influencing the land, Mr. Stach has shaped a national practice in preservation landscape architecture and has worked to protect and restore more battlefields than any contemporary in his field.  During early employ with the National Park Service at Antietam National Battlefield, Stach was moved by the significance and indescribable connection we may share today with those who sacrificed their lives for our freedoms; the landscape experience of “hallowed ground.” Today Mr. Stach, working in association with the incomparable expertise of historian John Salmon, is studying the “Rapidan Front” made possible by a grant awarded to the Friends of Cedar Mountain by the American Battlefield Protection Program (ABPP). Since 2014 Mr. Stach has lent his expertise in preservation and design to the American Battlefield Trust’s proposal, now fully adopted by the Commonwealth of Virginia, to envision the creation of the Culpeper Battlefields State Park, passed by Governor Youngkin earlier this month.

Jeffry D. Wert, historian and author. Jeffry D. Wert is the author of eight previous books on Civil War topics, including Cavalryman of the Lost Cause and The Sword of Lincoln. His articles and essays on the Civil War have appeared in many publications, such as Civil War Times Illustrated, American History Illustrated, and Blue and Gray. A former history teacher at Penns Valley High School, he lives in Centre Hall, Pennsylvania, slightly more than one hour from the battlefield at Gettysburg.

John Christiansen, Executive Director of the Museum of Culpeper History. During his career, he has worked at the South Carolina Department of Archives and History, the Chrysler Museum of Art, the Cedar Creek Battlefield Foundation, and the Lee-Fendall House Museum & Garden. John will lead a walking tour on Friday of historic downtown Culpeper.

Michael Block, will lead the bus tour, Confederate Approach to Battle, on Friday. He is the  author of “The Carnage Was Fearful; The Battle of Cedar Mountain, August 9, 1862.”   The 2022 publication is part of Savas Beatie Books Emerging Civil War series. A life-long student of the Civil War, Michael moved to Fauquier County, Virginia, in 2004 and developed a deep appreciation of the war’s impact on near by Culpeper County.  As a public historian, he gives battlefield tours and lectures, focusing on the stirring wartime events in Culpeper, including those at Cedar Mountain, Kelly’s Ford, and Rappahannock Station.  In addition to his first book he has published several articles and written an authoritative account of the Battle of Cedar Mountain for Blue&Gray magazine in 2016. Retiring from the United States Air Force in 2001, he continued supporting the U.S. Government as a consultant until 2020.   Mike is the former vice president of the Friends of Cedar Mountain Battlefield and resides in Orange, VA.

Bradley M. Forbush, will lead the battlefield tour on Saturday. He has been researching the 13th Massachusetts Volunteer Infantry (1861-1864) in depth since 1999 and shares his research with the public through his website and blog. He has conducted research in libraries and archives across the country including the Huntington Library in San Marino, CA. He has lectured on the regiment for various groups and institutions in Southern California and spoke at the 150th Anniversary of the Battle of Antietam at the famous Chambersburg Civil War Seminars. He has written articles for America’s Civil War, and Gettysburg magazines. Brad joined the board of Friends of Cedar Mountain Battlefield in 2019 and has been a battlefield guide at Cedar Mountain since 2018. He and his artist wife Susan moved to Virginia in 2015, after 24 years working at various animation studios in Southern California. He likes nothing better than sharing his enthusiasm for the soldiers’ stories of both sides with others.

Thank you for your interest in the seminar.