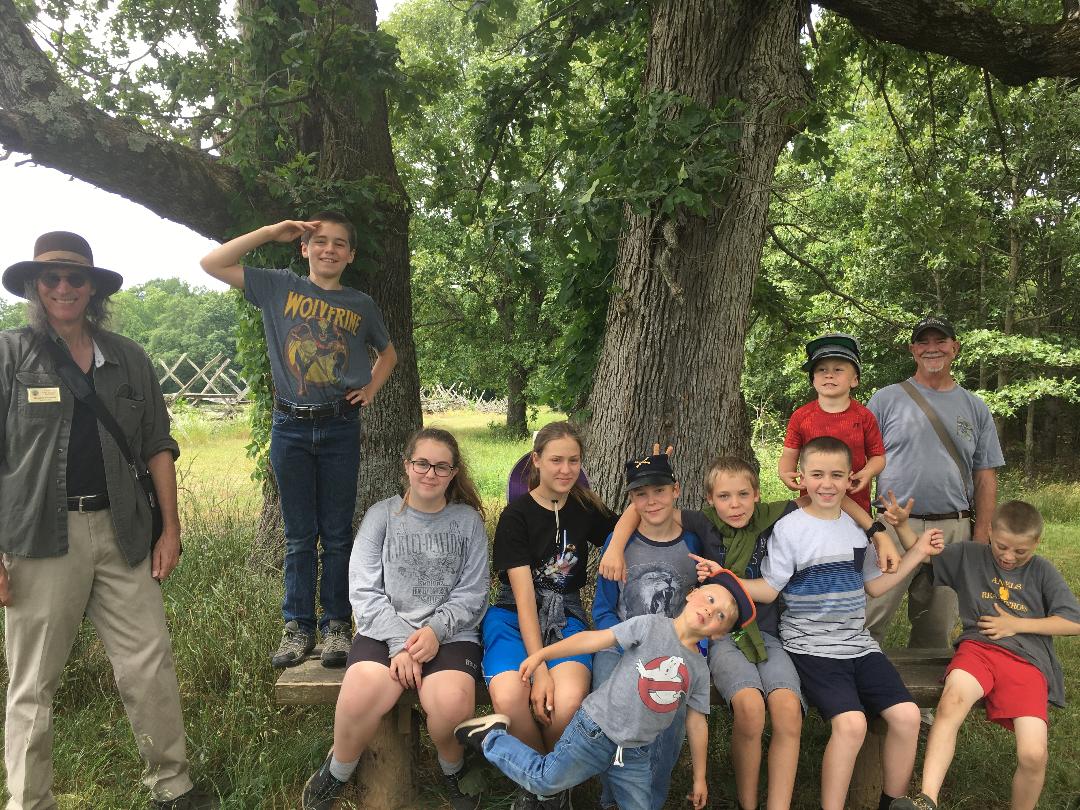 On Tuesday June 2nd, two adults and 10 children visited Cedar Mountain Battlefield for a prearranged tour of the grounds. The determined group traveled 2 ½ hours by car from Roanoke, VA. to reach their destination. Battlefield guides Brad Forbush and Vic Middlekauff greeted them at the meeting house when they arrived at 9 a.m.

To aid in entertaining this young group, ranging in ages from 14 to 2, the guides brought with them several period artifacts selected from their personal collections to share with the visitors.

Authentic samples of some of the equipments a typical Southern soldier would wear, including a haversack, canteen, cartridge belt and more were passed around among the guests.  There were also samples of ammunition on hand;  round balls and rifled bullets, artillery fuses, iron shot, and shell casings, all of which are very heavy when held.   A brief overview of period weaponry and tactics made apparent the reason the war was so costly in terms of human life.   To top it off, the guides were able to demonstrate with caps, —the firing mechanism of a period Enfield rifled musket, making a small noise but a big impression.

In addition to equipments there were several photographs, scanned diary entires, and period documents to be seen. 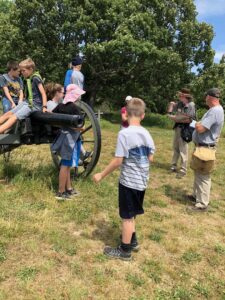 After this special introduction, which lasted about 45 minutes, and a short summary of the battle, the “troops” took to the field.   Asked whether they were up for a walk around the battlefield perimeter, one young girl remarked that they had hiked 10 miles the previous day while visiting Appomattox!

On the trail, landmarks of the battle were pointed out, while stories of the fight kept everyone engaged.  The reward for walking the perimeter was a final stop at the two battlefield cannon.

It was a rewarding tour for everyone involved, guides and visitors alike.   The pictures are worth a thousand words.

Pictured at the top of the post, guides Brad Forbush and Vic Middlekauff pose with the young tour group that drove up from Roanoke, VA.