This is the 2nd installment of our look at four memorable tours given at Cedar Mountain in 2019. A descendant’s interest in his ancestor’s experience at Cedar Mountain leads to a guided tour focusing on the 27th Indiana.

In July, Mr. Bob Shaffer contacted FCMB Vice President Michael Block to share information about his grandmother’s uncle, Edmund R. Brown, and to schedule a private tour with the Friends of Cedar Mountain.   The date September 19 was set to escort Mr. Shaffer around the battlefield.  Edmund R. Brown wrote the beautifully descriptive regimental history of the 27th Indiana Volunteers published in 1899.   His eloquent words are often quoted on tours of the battlefield. Here’s a brief example describing the regiment’s  eight mile march to Cedar Run which began just beyond Culpeper.

“The air was as hot as a bake oven.  Going directly south, near the noon hour, the sun beat mercilessly into our faces.  Our small, cloth caps, with narrow visers, were poor protection for our heads and eyes, while, with our heavy, regulation dress coats tightly buttoned, our bodies seemed to be a furnace of fire.  Not more than one or two of the Twenty-seventh were sunstroke and fell down in convulsions, but scores of other regiments were affected in that way. As we passed along in the intense heat we saw many o them lying on the ground, frothing at the mouth, rolling their eyeballs and writhing in painful contortions.  This march was the first of several almost incredible things accomplished that day.” 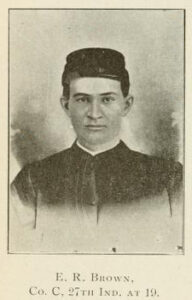 Bob brought a copy of his ancestor’s book with him to Cedar Mountain while the 3 of us, Mike, Bob and I, explored the battle from the perspective of the 27th Indiana.  We drove behind the preserved land to see the high hill where the Brown House once stood, the jump-off point of the 27th when they advanced into battle.  From here,  two companies, C & F, were detached to the right a half mile as flank guards and were not engaged this day.  They were forgotten about when the Union lines fell back, so the two companies had an adventure finding their comrades after the retreat.  From the Brown House the regiment stepped off on the double-quick, across Cedar Run, towards the battle already in progress.  It was a long difficult approach.

Our tour stopped in the woods, again on private property, where the old road trace of the Civil War era Wayland’s Mill road can be found.  Before us was the rugged, rock-strewn embankment the 27th charged over during their advance.  Brown wrote:

“Where the left wing of the Twenty-seventh struck the slope it rises at an angle of almost forty-five degrees.  All the way up the surface is not only steep, but mostly very broken.  Ravines, gulches, ledges of rock and innumerable loose stones, large and small, impede the progress at every step.  Trees and low bushes stand thick, with fallen tops and limbs and a tangle of vines and briars in many places, next to impenetrable.” 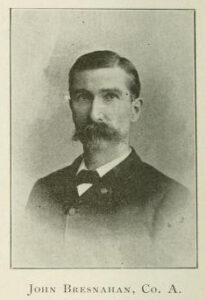 Looking down the slope today, the ground remains the same and Edmund Brown’s words came alive for us.   Nearby, on top of the wooded hill, stands a monument to the 27th, near the spot where the regiment stepped off the hill into combat.   It was placed in 1901 by John Bresnahan, of Washington, D.C., a Company A veteran who also placed the regiment’s monument at Chancellorsville.

Our tour group left the woods and proceeded to the battlefield proper, where we walked the ground near the 3rd Wisconsin Monument.  It was here the 27th met the enemy in earnest.  When the regiment hit the fence bordering the wheat field they had to climb over it, or get around it somehow as best they could.  The enemy brigades of James J. Archer and Charles A. Ronald were in front and firing.  The regiment, being unprepared to respond,  had to fall back.  They reformed on a ridge a short distance from the fence and went in again, this time firing as they entered the fray.  Now in addition to Archer & Ronald’s brigade, William D. Pender’s brigade was on their flank.  And here we have a mystery, still to this day.

In the first advance the  3rd Wisconsin, was on the left of the 27th Indiana.  Six companies of the 3rd Wisconsin followed  Crawford’s brigade into the wheat field after a short delay and were forced back.  The 27th Indiana passed some of these troops in the woods on their advance.  The 3rd WI troops reformed and returned to the battle.  Because their battlefield monument is so far to the right of the Union line, it is presumed they came in on the right of the 27th Indiana.  It is a puzzle that remains to be solved.

Historian guide Michael Block was able to point to certain characteristics of the ground here, and offered his theories on the location of the hill where the 27th fell back and re-formed before their second charge.

One last point on behalf of the 27th Indiana Infantry.  Their Brigade Commander General George H. Gordon constantly slighted them.  Another member of our board, historian Alonzo Lacey, whose great great uncle, Henry A. Ferris (Farris) served in the 27th and survived all its campaigns, said to me, “at Buckland Station, between Strasburg and Front Royal, the [27th IN] regiment, with some others of the 3d WI skirmished with Turner Ashby’s Cavalry and beat them back, but Gordon said they were routed.” 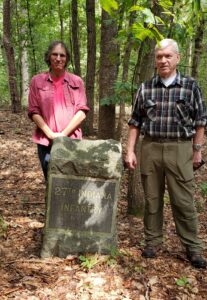 General Gordon slighted the regiment again in his official report of Cedar Mountain.  But as Edmund Brown points out, in Gordon’s own book, “From Brook Farm to Cedar Mountain,” which was written years later, the brigade commander gives a more accurate account of events.

And so ended our exploration of the 27th Indiana at Cedar Mountain.  Its a part of the battle we don’t often get to tell due to time considerations.  In Mike’s words, “getting down to details and really understanding what was happening” make these kinds of tours especially rewarding for visitors and guides alike.  As Bob Shaffer summed up, “Walking the ground is the only way to understand it.”

Pictured above is the author at left with Mr. Bob Shaffer at the 27th Indiana Monument.