FCMB Board Member Lon Lacey passed away, Friday, December 13, 2019.  He was 84. This remembrance was contributed by Michael Block, Vice President, Friends of Cedar Mountain Battlefield.

I first met Lon Lacey in February 2012, when we both joined the Friends of Cedar Mountain Battlefield (FCMB) Board of Directors. We were two of three new members who joined at that time, with the general thought of infusing ‘fresh blood’ into the organization. It was also just prior to Cedar Mountain’s Sesquicentennial commemoration. We were both thrown into the deep end from the start. Lon didn’t miss a beat. His first project was to plan and execute a one-day symposium on the Battle of Cedar Mountain. The program went off flawlessly.

Lon brought a passion for the history of the fight with him, having an ancestor who fought with the 27th Indiana Infantry. The historical detail of the battle was something Lon realized was missing from the FCMB. The current board makeup had an understanding of the fight, but lacked the details. We decided that needed to change.

Over the intervening seven years we served together the variety and depth of tours increased significantly. No longer were visitors conducted along the wartime road and out to the “Point.” They were taken onto Cedar Mountain where Joseph Latimer positioned his guns. They strode down into the “brushy field” where George H. Gordon’s men were set upon from three sides. Our guests were also taken off the battlefield, to the streets of Orange Court House, the Widow Brown house site, the front yard of the Gilbert House, where McGilvery’s battery anchored the Federal left. And most importantly for Lon, the positions of Capt. James Thompson’s Battery C, Pennsylvania Light Artillery in their late night engagement with Captain Willie Pegram’s Purcell Artillery. That evening, the Federal guns stopped the Confederates.

Lon researched that portion of the fight in significant detail. Not only diving into archives and online resources for the bits of information, but also reaching out to re-enactment groups who had the passion for the units involved. The information Lon assembled was amazing. He pin-pointed the battery’s location. Having served in the U. S. Marine Corps and a full career in the FBI, it is no small leap where he acquired his skills. His efforts rewrote our understanding of the artillery duel, and how Thompson was able to use his guns to their maximum effect, quickly rendering the Confederates combat ineffective and forcing their withdrawal. The impact of Thompson’s skill was documented for posterity by Timothy O’Sullivan’s stunning photo of the dead horses of Pegram’s battery, the first Civil War image of dead on the battlefield.

His quest for accuracy did not end there. In 2013, the American Battlefield Trust (ABT), then Civil War Trust, proposed to replace our aging wayside markers with updated ones, with new text, images and maps. Lon and I dove into that project, reviewing the proposed markers line-by-line, discussing what was being said, its relevance to the location and the proposed supporting material. In nearly every case, based on our research, the markers were revised based on the on-the-ground battlefield knowledge and the significance of the position where the marker was placed. In Lon’s mind, this was fast becoming his battlefield, and the accuracy was not to be encroached upon. 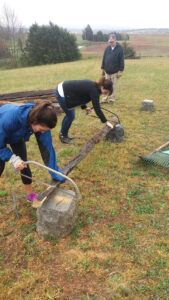 The locations and types of the fences throughout the battlefield was another project Lon pursued. Fences on the Cedar Mountain battlefield have never been mapped, though there is a wealth of information available in the period photographs, after-action report, diaries and letters and the art. Lon convinced the ABT to revise and relook at their understanding of the battle and how the fences impacted the fight. It was through Lon’s efforts that a fence now runs along the “Point.” Each year, on Park Day, it grows a little more. And this coming April, that legacy Lon began will continue. In my mind that fence is and will always be Lon’s.

Lon was also a teacher. He loved nothing more than meeting guests on the battlefield and detailing the brief campaign and Battle of Cedar Mountain. The groups were varied and diverse, and Lon had the skill to speak to each group at their level of understanding and their particular interest. He coordinated and brought corporate leaders led by Maj. Gen. (Ret) Eric Vollmecke, members of the North-South Skirmish Association, and the Warwick School. These are just three of the hundreds of tours, groups or individuals Lon led across the battlefield.

The corporate leaders participated in a staff ride of the battlefield and had an additional experience during their afternoon. They were taken to a nearby farm that had a firing range. Once there, Lon broke out a number of rifles from his extensive collection. After describing the weapons, the staff riders were allowed to try their hand at firing these historic weapons.

When the North-South Skirmish Association toured the field, Lon gained permission and access to the Cedar Mountain Shelf, a private location few have had the privilege of visiting. The view is spectacular and you gain an immediate understanding of the impact on the battle Confederate artillery had from that position.

In April 2016, we were visited by the Sixth Form (or Seniors) from the Warwick School, Warwick, England. This boys’ school is believed to be the oldest boys’ public school in the world. The group was traveling up and down the east coast and made Cedar Mountain a stop on their journey to Charlottesville. For three hours, Lon and I described the battle and the relevance to the Virginia campaign of 1862. While I am sure the young gentlemen enjoyed the tour and talk (and lunch) what got them all excited was the opportunity to handle Lon’s weapons. It was a rare treat and the boys thoroughly enjoyed the moment.

Lon was instrumental in acquiring the two replica cannon that crown a hill on the battlefield. Plans were underway and funds collected to purchase a replica when the opportunity to have two from a former museum at Gettysburg were made available to the FCMB. Lon took point on all aspects of the cannon movement and refurbishment. He worked to transport them from Gettysburg, found a location and individual who would strip, break down, repair, rebuild and repaint the 126-year-old cannon. The result of the six-month process revealed two nearly pristine 3 inch ordinance rifled cannon you see at Cedar Mountain.

As many of our board members d0, Lon re-enacted with a passion. He was key in finding units that would journey to Culpeper to take part in living history events or demonstrations. He brought Thompson’s Battery C down from Pennsylvania (a unit after his own heart) and the 2nd Maryland Fife and Drum Band, of which his son is a member. Artillery and music on the battlefield provides impact, and Lon delivered.

Lon was intensely focused on battlefield preservation. He constantly looked for opportunities for some positive action whenever a piece of property on the battlefield became vulnerable. One of our first actions was supporting the ABT in purchasing the home on the edge of the battlefield that is now used for multiple purposes and functions as well as the ten acres directly across the street. When property fell onto our radar, Lon would research the history of that ground so the significance was understood. The documentation created was passed to those who needed it to fight whatever the fight was, be it an outright purchase, a viewshed challenge or just to better understand its relevance.

I will miss the battlefield walks Lon and I took, going over the movements, actions and reactions, as well as the healthy discussions on what each of us believed happened, and where it happened. We always parted friends. His conversations at board meetings were always on task as to how the actions taken by the FCMB would move the group forward. The impact of his loss has not yet been realized. But Lon Lacey, you are already sorely missed.

Rest in peace my friend, and Semper Fi!