This is the 4th & last installment of a series of four memorable tours given at Cedar Mountain Battlefield in 2019. Links to the previous 3 tour reports can be found at the end of this post.

The last tour I will profile here was a particular pleasure for me.  It was a comprehensive driving tour of the entire range of the 1862 battlefield.  It began as a challenge.

FCMB board member Karen Quaintance directed two visitors from New Hampshire to contact FCMB via our website in order to arrange a tour of Cedar Mountain on their next visit to the area, and I answered the call.  These were not average tourists, but seasoned battlefield explorers.

In his initial contact, Mr. Bill Boyle wrote me:

“I believe my friend Mike Carlson and I have visited Cedar Mtn. three times over the years. We come fully equipped with battlefield maps.  Just to give you a little background we have been researching battlefields and sites for nearly 25 years.  We are members of the American Battlefield Trust, Shenandoah Valley Battlefield Assoc., Gettysburg Foundation, Friends of the Wilderness etc.

After recently reading Krick’s book Stonewall Jackson at Cedar Mountain and reading the maps we realized we had a lot more to learn.”

Wow, this was intimidating, I thought.  I’m not sure what I can tell them that they don’t know already.  But I had a great opening.  Further conversations revealed their particular interest in Pegram’s night-time artillery duel, a keen interest which I share with them, and which story I know well.  But it wouldn’t  take very long to show them the spot, so I determined to add in some special  extras for our tour. 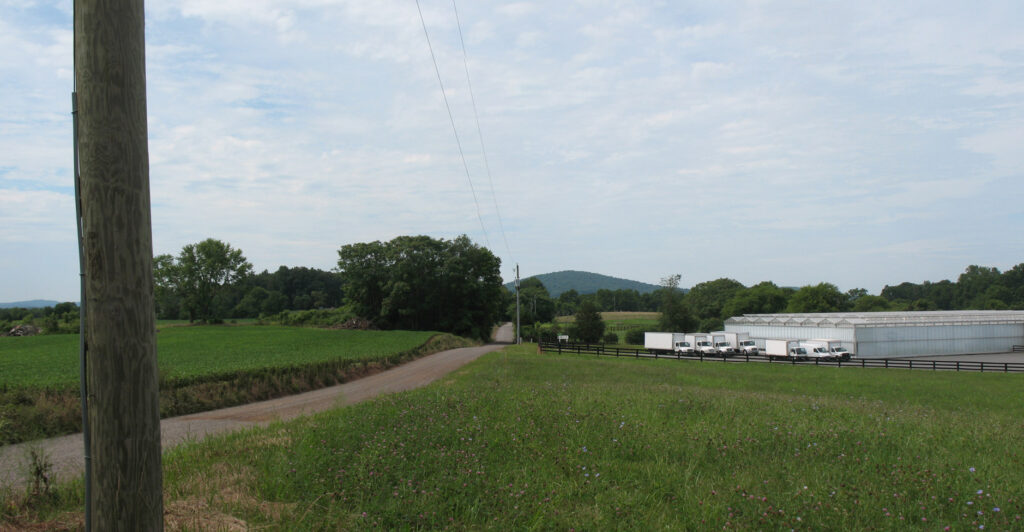 Pegram’s Knoll is the high ground behind the white building in this photo.  Old Orange Rd. (the original road during the battle) pictured.

Through our FCMB partners, I obtained permission from the current owner of the Rev. Philip Slaughter property to bring my guests up the 200-foot hill where the Slaughter house once stood.  The battlefield landmark is referred to as “The Shelf.”   From here, Generals Ewell & Isaac Trimble had a magnificent commanding view of the entire battle.

Trimble wrote, “I was ordered to advance through the woods on our right along the slope of Slaughter Mountain and occupy a favorable position. About 3 o’clock the brigade reached the northwest termination of the mountain, in an open space elevated about 200 feet above the valley below, and distant form the position of the enemy’s battery about 1 1/4 miles,  …Having sent for you [Ewell] to examine the point, you decided to drag up Latimer’s battery, of my brigade, and place it in position, which was done promptly, about 3:30 p.m.” #1

From these heights, 18 year old Capt. Joseph Latimer’s untouchable battery belched forth rounds from 4 rifled guns, upon the broad plain below.  Two guns of Nathaniel Terry’s Bedford Artillery joined them.  Soldiers of the 35th Battalion VA Cavalry assisted pushing the guns up the hill.  Some died of heat stroke in the process.  The chance to visit this hill would be a highlight for both visitors and guide alike.

October 7th, 2019, the day of the tour, was a blast.   In my “worse for the wear and tear” Camry, or, “the adventure vehicle of choice,” as I like to call it, we visited the Shelf, where we took our time exploring the mountain, searching out the perfect spot for Latimer’s artillery to take position.  Trees obstruct the view today so it was challenging, but we think we succeeded.

The current house standing today is built on the same footprint of the original Slaughter home.

A week after the battle, David Hunter Strother, one of General Banks’ staff, wrote in his memoirs:

“August 17, Sunday.   …I rode over to the mountain and visited the house of the Rev. Dr. Slaughter, late rebel head-quarters, and commanding a beautiful and comprehensive view of the country from Culpeper to the Rapidan.  This house has been completely gutted; and it was pitiable to see the fragments of a tastefully-selected library fluttering over the fields on the mountain side.  Among these I recognized the torn leaves of a valuable Italian collection called “IL VATICANO.”  The plates illustrating the frescoes, painting and statuary of St. Peter’s and the Vatican were all gone.  The furniture of the establishment had received no better treatment.”

“At the corner of a wood I found a large party of our soldiers industriously engaged in exhuming something from under a mound of fresh earth, supposed to conceal silver plate and other treasures.  The sun was broiling, and they sweltered considerably at their voluntary labor.  They presently stirred up the putrid body of a horse.  This instead of disenchanting them only served to create fresh hopes.  What more adroit and natural way of concealing treasure than by burying it under this offensive body?  Suffocated by the intolerable odor I left them, still in high hopes, declaring that every stroke of their mattocks gave forth a hollow sound.  Doubtless their hopes proved as hollow as the sound.” #2 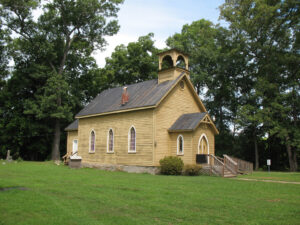 Down the mountain we visited Divine Life Baptist Church, which stands on the site of what once was Calvary Church, established 1855.  The Church was destroyed during the battle but the stained glass window was saved by Mrs. Philip Slaughter.

Captain Charles T. Crittenden of the 13th VA, who fought this battle on his own land, is buried at the church. 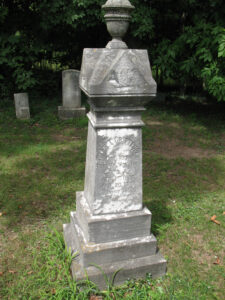 After visiting these sights we drove up the Old Orange Road to the area of “Pegram’s Knoll.”

“I was directed to follow the enemy.  Colonel Stafford and General Field being now up, Stafford’s brigade was put in advance, and Field with Pegrams’ battery next…Stafford advanced, feeling his way cautiously, skirmishing, and taking prisoners.  Passing through the woods he came upon the enemy in force. By directions of General Jackson, Pegram occupied a little knoll upon the margin of the field and opened fire.” #3

“All at once Bang! went a cannon and a shell came whistling over our heads.” wrote a gunner from Battery K, 1st NY Light Artillery  “We had our battery in position in front of this Rebel battery but they did not know it for it was very dark when they ran their battery through the woods in front of us.  As they came up with the battery by our pickets the captain of their battery says to our pickets, “Here men help get this battery in position and we will give them g-d d—- Yankees hell!”  But he thought they were his own men.  They (our pickets) thought it was one of our batteries, but when he spoke our pickets left on the double quick. As I said before they fired the first gun. I tell you when our guns opened upon them the shells made them scatter very quick.  When they fired, you oddly see a regular stream of fire come out of their guns.”  #4

“The next morning 2 lieutenants of artillery were found dead on the spot occupied the evening before by the enemy’s battery, with abundant evidence that they had suffered terribly in killed and wounded.  Eleven dead horses were piled up within a few rods and 8 more were found dead along the road upon which the enemy retreated, together with a disabled caisson.”#5

Pictured are the dead horses on Pegram’s Knoll.  Photo by Timothy O’Sullivan, August 1862.

After our brief stop near Pegram’s Knoll the tour continued up Old Orange Road, across Route 15 to the sight were Colvin’s Tavern once stood.  From a hill above the tavern, artist Edwin Forbes sketched the tavern then being used as a hospital.  His caption, “The battle of Cedar Mountain.  Night at the hospitals.  Arrival of Gen. McDowell’s Corps.”  The key on the back describes numbers 1 – 7 on the drawing.  1.  Blue Ridge Mts.  2.  Turnpike.  3.  Confederate battery firing on the retreating Union forces. 4.  Thompson’s Union battery replying.  5.  Old farm house used as a Union hospital. Wounded lying on the ground.  6.  McDowell’s Corps arrived after forced march from Culpeper C.H.  7.  Gen. Pope’s headquarters. 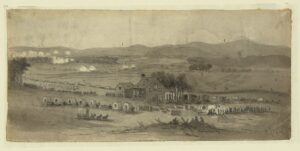 The site of the tavern and the hillside behind it are today dotted with modern houses.

The driving portion of this comprehensive overview of the battle continued.  We passed the Nalle House on route 15, which was Gen. Pope’s headquarters the night of August 9th, and turned up a road which took us to the hill where the Brown House once stood. 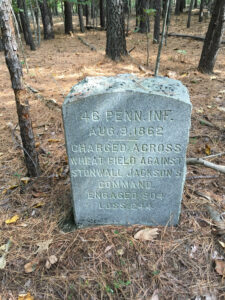 Then, with the 27th Indiana tour fresh in my mind, we drove to the Wayland’s Mill road trace and walked into the woods to see the broken ground which General Gordon’s Brigade crossed to the battlefield.    Next we visited the three monuments in the woods and took pictures.  These are the monuments to the  28th NY, the 27th Indiana, and the 46th PA.  Lastly, we drove around to the front of the woods to see the 10th Maine monument.  Because the site was then covered with corn stalks, it was difficult to see the low ridge where Major Pelouze and Colonel Beale had their tete-a-tete over whether to advance or fall back.

John M. Gould wrote in the history of the 10th Maine:

“Without delay we faced about, and had retreated a few steps when Major Pelouze, a staff officer, rode out and said that Gen. Banks forbade this movement, but the Colonel persisted and we kept on.”

“The staff officer grew furious and appeared to be having a fist-fight with our Colonel, so animated were the gesticulations of the two officers.  The Major said much that the Colonel thought was unnecessary, and ended with the peremptory order to halt the regiment.”#6 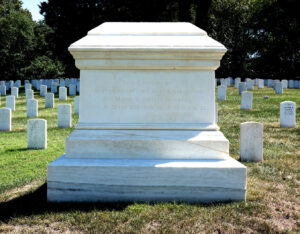 Pictured is the 10th Maine Monument at Culpeper National Cemetery.

This ended the driving portion of our tour.

Back on preserved ground we proceeded to walk the length of the entire field.  After circumnavigating from “The Gate” to “The Point” to the 3rd Wisconsin Monument, and the Stonewall Brigade marker, I felt I had presented all the information I could.  But Bill & Mike were not finished.

My two guests wanted to walk the bit of preserved land across VA Route 15 that was Brig-Gen. Taliaferro’s  line, and so we did.

Taliaferro’s Brigade quickly marched to this spot, in line of battle, from their position in the woods near the Crittenden Gate.  They had been lying is support of Confederate batteries and taking enemy shells, that “were tearing the forest to atoms.”  So they eagerly complied with orders to connect with the left of Gen. Early’s Brigade to the south along Crittenden Lane.  At the proper place they wheeled 90 degrees and advanced “over the ridge” near the lane, then over the fence on the east side of the lane and into the presence of enemy infantry skulking in the corn.”#7 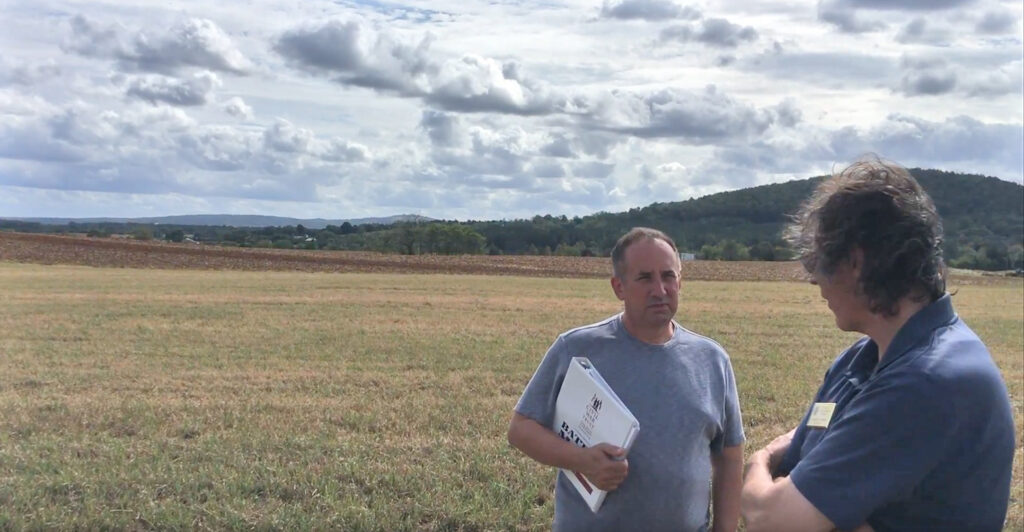 This was the kind of tour that was a blast for me.  One where the participants had the time and passion for seeing it all.  Everything I learned through research and following FCMB V.P. Michael Block around the field for 1  1/2 years was conveyed, and new places were visited by all.#8

The year 2019  was an exciting one at Cedar Mountain Battlefield.  Our battlefield guides await new visitors in 2020.

#8.  Look for the release of  FOCMB Vice President Michael Block’s new  book on the battle next year, titled  “The Carnage was Fearful” coming from Savas Beate books.  It will be a great compliment to the already outstanding work on the subject, “Stonewall Jackson at Cedar Mountain” by Robert K. Krick.

Links to the previous posts in our 2019 tour highlights series:

Some Memorable Moments from the 2019 Tour Season

The 31st Virginia at Cedar Mountain